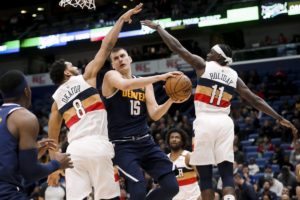 The Denver Nuggets are coming off a loss to the Houston Rockets on Wednesday. They have a record of 30-14 and fourth in the West. The Nuggets are having problems with player injuries like Paul Millsap, Jamal Murray, and 2019 draft pick Bol Bol. Jokic also made a triple double19 points 10 assists 12 rebounds against Houston, which was not enough as some of their players didn’t provide much help for the team. The Nuggets are having a hard time losing their starting players to their game.

Meanwhile, the New Orleans Pelicans have something to cheer Zion Williamson’s is returning to play, but they also fell to the San Antonio Spurs on Wednesday 121-117. Zion scored 22 points in 18 minutes. The Pelicans were 2-3 in their last five games and 8-14 at home overall. Brandon Ingram is the Pelicans’ leading scorer averaging 25.5 points in 34.7 minutes per game.

Denver is 13-8 in their road game while the Pelicans are 8-14 at home. This fight shows that the Pelican team is healthier. However, they are not able to underestimate Denver’s ability to struggle despite player injuries and remain in fourth place in the West. The Pelicans have a lot of turnovers and sloppy plays that could be an advantage for the Nuggets. My prediction is that Denver will be the only win over the Pelicans.