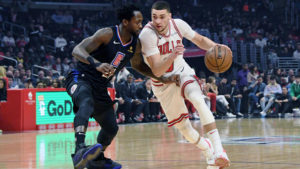 The Los Angeles Clippers and Chicago Bulls will compete at the United Center. The Clippers have a three-game winning streak after defeating the reigning NBA Champions Toronto Raptors led by former Raptors Kawhi Leonard who is now with the Clippers. The Clippers have an excellent performance in the game led by star duo Kawhi Leonard and Paul George, in this match 6th man Lou Williams is not going to win the game. However, I think it’s still better Clippers versus the Bulls have a deeper Clippers bench, and they are known as the current defensive team in the league, and they can use coach advantage in this game.

Meanwhile, the Bulls Team is having some problems that are still finding a solution. Scoring 73 in a home game against a Hornets-like team is lacking in hard work and dedication to the Bulls, and this team needs another player who can help with the offense and a better coach to organize everything.

My prediction is also that it will be easy for the Clippers that has the best coach, best defensive player, and a reliable offensive team.