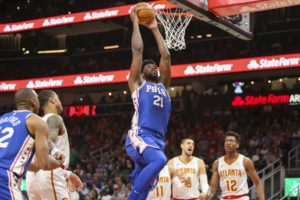 The Philadelphia 76ers are looking for another win to rise to the standings and will try to beat the Atlanta Hawks as a stepping stone to their third straight win on Thursday night. The Sixers earned back-to-back wins over the Golden State Warriors and Los Angeles Lakers. Once again, they will try to continue that victory over the Hawks coming off a lopsided 130-114 loss to the Toronto Raptors. Joel Embiid scored 24 points on his return to the game, wearing a jersey number 24 in memory of late NBA legend Kobe Bryant. The Sixers have won six of their last seven games, including back-to-back wins over the Golden State Warriors and Lakers. The Sixers did not play well in the offense, but Embiid’s return is an excellent thing for the team.

Meanwhile, The Atlanta Hawks have struggled in offense and defense, and they are now looking for their right rhythm for the team. If Trae Young and John Collins don’t work for the Hawks, they will go too far to win against the Sixers, and another is that how they will stop Sixers when it comes to defense, especially and Joel Embiid will play for the Sixers. Jabari Parker’s current injury has been a significant impact on the Hawks.

In my prediction, the Sixers have the advantage in this match, especially and Embiid is back in the game, and Jabari Parker of the Hawks is injured. I’m on the Philadelphia 76ers in this match.