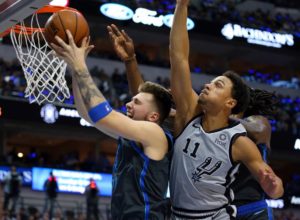 The San Antonio Spurs team is looking for a way to prevent a losing streak. The Portland Trail Blazers defeated them on Sunday with a score of 121-116; on Monday, the Spurs will face state rivals Dallas Mavericks.

The Spurs are led by Demar DeRozan, who averages 19.8 points per game and is also the leader in assists with Trey Lyles, averaging 4.8 per game while rebounding with 7.9 per game. Seven Spurs players are averaging double digits to help the team.

Dallas wants to seal a second win on Monday against Spurs. The Mavericks defeated the defending champion Toronto Raptors by a score of 110-102 with Luka Doncic scoring 26 points and 15 rebounds. Doncic added seven free throws in the fourth quarter to lift the Mavs against the Toronto Raptors, which gave them a 7-5 lead.

Doncic led the way in scoring, assists, and rebounding for Dallas averaging 28.5 points, 10.7 rebounds and 9.1 assists per game. Kristaps Porzingis was second in points averaging 18.8 points per game and blocked shots averaging 2.4 per game. Four of the Mavs players scored in double digits.

My prediction for this match is that the Dallas Mavericks will win and cover the ATS they’ve done in their last games. The San Antonio Spurs have struggled and suffered five straight defeats and failed to cover ATS in 4 of their five games.