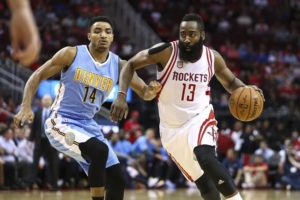 The Houston Rockets defeated the Portland Trail Blazers 132-108 on Monday and improved the team standing 11-3. James Harden scored 36 points, while Westbrook scored 28 points in his triple-double. Houston wants to continue their hot winning streak against the Denver Nuggets. Houston leads the Southwest division of the 2.5 games with the Dallas Mavericks.

The Denver Nuggets improved their Team Standing to 9-3 after defeating the Memphis Grizzlies Sunday 131-114. Jamal Murray led the team with 39 points, and Paul Millsap followed with 23 points, Juancho Hernangomez added 15 points. The Nuggets outscored Memphis in the second quarter with a score of 44-17.

The Rockets are 0-8 straight up and 7-1 ATS in their last eight games. The Head to Head of Houston and Denver is right to bet because it will provide a good match, but when it comes to leading scorers, Houston is superior to Denver. The Rockets have covered four of the last five games in Denver six of seven overall. My prediction is that Houston will win this match.