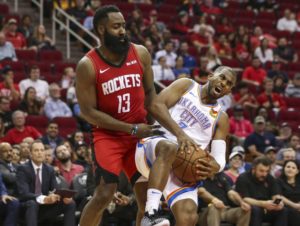 The Oklahoma City Thunder defeated the Portland Trail Blazers by a score of 119-106 and will now take on the Houston Rockets. The Thunder have won two of their last five games, and they are seventh in the Western Conference. The Thunder are averaging 109.4 per game, shooting 46.6 percent from the field and 34.4 percent from three. The Thunder team had five players scoring in double figures led by Shai Gilgeus-Alexander, who averaged 20 points per game with 5.8 rebounds and 3.1 assists per game.

Meanwhile, the Houston Rockets have suffered three straight defeats and are hoping to stop the bad luck. Houston is sixth in the Western Conference and 14-6 in their homecourt this season. Houston is averaging 118.7 points, with 45.2 percent from the floor and 34.8 percent from three. The Rockets are led by James Harden, who averages 37.1 points per game 6.2 rebounds and 7.4 assists. Six of the Rockets players scored in double digits.