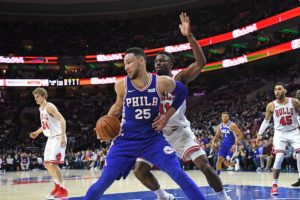 The Bulls are on the road and will travel to Philadelphia after beating the Wizards 115-106 win in a home game Wednesday night. With the Bulls in third and a tie in the Central Division, Zach Lavine led his team with 30 points and seven rebounds and seven assists to defeat the Wizards. The Bulls are 25th in the league when it comes to the offense this season. They are averaging 106 points per game, while the Bulls are 10th in the league in defense, giving up 107.7 points per contest. With Lavine averaging 24.6 points per game this year, the Bulls will need some player support to keep up against Philadelphia rivals like Otto Porter Jr. averaging 11.2 points and 9.9 rebounds. And Thaddeus Young contributing 9.1 points per game.

Meanwhile, Philadelphia is back in action after defeating the Brooklyn Nets, Philadelphia third in the Atlantic Division, and sixth in the Eastern Conference. The 76ers are 20th in the league in offense, averaging 109.1 points per game this year. They are sixth on defense giving up 105.7 points per contest, Joel Embiid leads the Philadelphia team averaging 23.4 points 12.3 rebounds and 3.3 assists per game. At the same time, Ben Simmons is averaging 15.3 points, 7.6 rebounds, and 8.4 assists and 2.2 steals in a game. Philadelphia ranks eighth in field goal percentage, with 46.9 percent from the field. Embiid, meanwhile, is undergoing surgery on his torn ligament to the finger and is expected to miss a few weeks.

My prediction for this fight is that Philadelphia will be able to win more than the Bulls, even without Joel Embiid having players who can make a big contribution to the 76ers, which is what the Chicago Bulls lack. Philadelphia is solid in the home game as the Bulls look for players who can add help to their team.